NOW going to bat for protective moms like me

NOW going to bat for protective moms like me 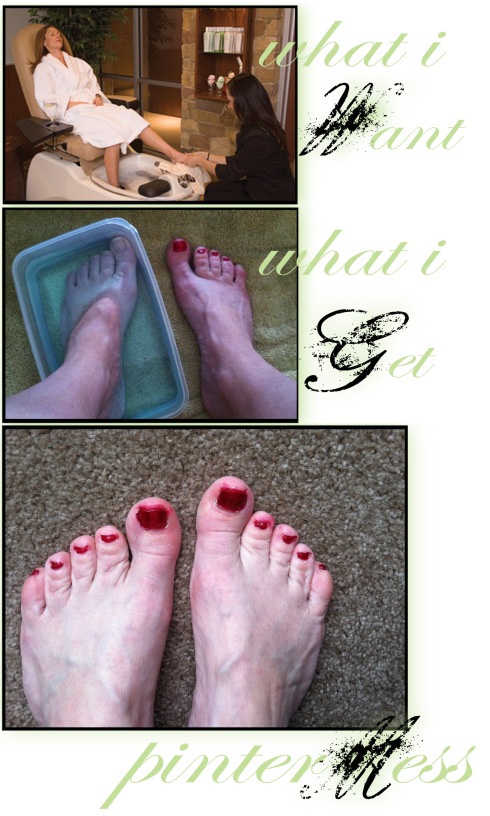 What I wouldn’t give for a pedi! Making the best of my low budget, I tried my listerine/vinegar DIY pedi. And while my feet feel soft as a baby’s bottom and smell minty fresh, I had a little trouble with the painting of the toes. You’d think as an artist, I wouldn’t make such a pinterMess!

I am entering, yet again, into another court date on June the 9th.  I have said since last fall that the FOC is going to push this out until the summer and then throw me in jail so that they can justify it without taking my kids out of school.  Guess what June 9 is… Yup!  My kids’ last day of school.  We have more false claims of denial by my ex-husband, who has not paid a dime of support since the last hearing and the FOC has chosen to come after me for not paying $100 for the drug test they helped him fake with no documentation or receipts. (It was paid last week – and I recorded the t  He is approximately $14,000 behind in support but they lowered and backdated his support obligations based not on facts or laws but on the numbers my ex has provided them with.  They have swept $6000 of back childcare under the rug and flat out ignored my receipts for the last two years.  I have filed the motions they’ve said to file, and listened to their lies, watch them change their “policies” with no written documentation, paid for “mediators” who turn out to be FOC lawyers going to bat for Father’s Rights Groups and have come to the conclusion that this is just the FOC allowing my ex-husband to continue his domestic abuse through their system.

They are also holding me in contempt of court for another denial of parenting time – 45 minutes! When my ex-husband refused to get out of the car and show me he was sober…which is his court order to prove sobriety before and during his parenting time.

This last round began in Winter 2013 when I stopped my ex from drinking and driving with my children.  Instead of being applauded for stopping child abuse (see links below), I have been berated, yelled at by an FOC “parent coordinator”, coerced into a voluntary psychological evaluation which I passed with flying colors (a favorite tactic of the Father’s Rights groups) and harassed repeatedly.

I am now posting the transcripts of my hearing that was sent to me by the court transcriptionist to back my claims and make them public.  These are a matter of public record and anyone can obtain a transcript of these hearings.  I’m posting them unaltered because I believe that as tax-payers, you should be aware of what is going on and because I need your support.  I am only one mom, who refuses to be abused and intimidated any longer.  This has gone on for almost five and a half years and I’m tired of the games and lies.  This is my life and the lives of my children they are playing with.  Over this next week, I’ll be posting my documentation so that you can see for yourselves what my children and I have endured.

I am posting a screenshot of my email inbox showing the attached transcripts and how many MB the document is so you can see the only alteration I have made are to remove any personal addresses – for the safety of my family and my ex-husband. And then I’m attaching the actual document of the transcripts that were sent to me. It’s a long read as we were there all day covering 5 different motions.  (they pushed back all of my motions with denials of rulings and postponements.)

This hearing was actually 5 hearings in one. The court refused to rule on January 13, 2014 regarding my ex-husband not taking his drug test as ordered on September 6, 2013 and for not paying child support.  I begged the judge for a ruling on the child support as he hadn’t paid anything since October and I didn’t know what we would do for another 2 months with no money.  His response to me was, “If I ruled today, I would have to put him in jail.  Is that what you want?!”  My response back was, “No.  I just need him to pay his support.”

Please pm me with your thoughts and if you’re able to support us in this fight. 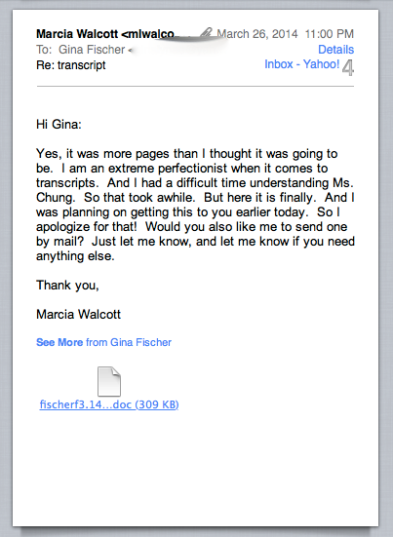 What is the public’s view of the role of the FOC?

Before I realized I was headed for divorce, I had never heard of Friend of the Court. I was THAT out-of-the-loop on divorce and child custody issues. I kind of heard of them but I really didn’t know who they were or what exactly they did.

I’m curious as to what you think the Friend of the Court is supposed to do for broken families. Please leave a comment or, if you prefer, send me a private message.  There is no right or wrong answer here…just looking for your honest opinion.  I will publish some of the responses (anonymously of course) later this week.

‘Sad Sister’ hits a little too close to home

‘Sad Sister’ hits a little too close to home

Today was my first day back to school…again. I was absolutely giddy! It was a gorgeous summer day, our first after the long, dark-night-of-the-soul, polar vortex, never-ending winter of doom and it felt so good! Not just the warmth on my face but on my soul. To be taking control of my future again, albeit on shaky ground and on blind faith, after getting waylaid by health issues and a broken heart two years ago, gave me a new hope that I haven’t felt in a long time. Although I may still go to jail next month (thanks to the court jesters and my ex-husband), I’m stepping towards a bright and sunny new future with less stress and more art. Bring on some more gracefulMess!

Maybe it’s time I skip around in my story and start sharing some dating disasters…or should I start a whole new blog devoted just to that?

I have such sweet and compassionate boys!  Last night, my 10 year old and I were home while my 12 year old was at youth group.  He was supposed to be working on his “Walter Chrysler” project as I was filling out FAFSA forms online for going back to school.  I kid you not, he was sharing a new fact like every 30 seconds.  My attention span is that of a gnat these days.  (You thought pregnancy brain was bad – try single-mom brain!)  I started getting a little irritated after about 15 minutes of this and snapped at him to pipe down and work on his project quietly.  Out came the lippy and big crocodile tears.  I immediately felt terrible.  He gets so excited when he learns new things and these are the moments I love most about motherhood.  He just wanted to connect with his mom because he was finding out all sorts of new things that I just had to know, too.  So I stepped away from my computer and pulled him on my lap and let him show me what he had done so far.  Five minutes.  That’s all he wanted.  Five. Flippin’. Minutes.

As I was trying to fall asleep, I kept racking my brain as to why it was so hard for me to give up those five minutes.  I gave myself a little bit of grace as I recounted all that happened in my day.  I work next to a person who has a running commentary of every negative thing that happens in her day.  It is almost constant.  Things like a number put in the wrong cell on a spreadsheet are animatedly narrated as, “Look at this!  Can you believe how STUPID people are?!  It’s supposed to be in this column and they put it HERE!  UGH!”  And heaven forbid someone come to our facility when they are looking to deliver something to one of our other four facilities in the same square mile.  Not only do we hear the conversation first-hand, we get to hear it retold at 95 decibels about how stupid they were to not read a map.  This affects the entire atmosphere for everyone as there is nowhere to run!  I literally put in earplugs yesterday (hidden by my hair so I didn’t get in trouble) so that I could drown it out and concentrate to get my month-end work done.  And an added bonus to my workplace is that almost every single person would’ve been fired at any other company for sexual harassment or their foul language.  This really plays a huge role in attitude that spills over into the rest of my life.

On the way home, I received a call from the Friend of the Court.  At this point I’m not even trying to be friendly with them.  I’m calling them out on every single lie that they tell and they hate my guts.  I kinda lost my cool when I asked Jason, who answered the phone, to verify that my fax had gone through.  He told me it was their policy that they don’t do that.  I questioned why and it was because it’s on the other side of the office but they have a high-tech fax that will send you a receipt if it went through.  Explaining that I did not receive one but it was critical that they receive this additional information so that I DON’T GO TO JAIL, he still explained this policy again.  Then my case-worker called with a bunch more BS that I called HIM out on.  So by the time I got home, I was a little raw to say the least.

I’m making some big changes as this current life is just not working for us.  Am I the mom I want to be?  Nope!  My choice to not finish school when I was young has landed me a low-paying job that isn’t ideal for how I’m wired.  While explaining some of this to my baby this morning, I apologized again for snapping at him last night. Things will get better soon hopefully.  He burst into tears.  He could see how hard my life is and felt bad for me because he knows “how bad you just want to be home with us.” This breaks my heart but I’m so proud of both of them for being able to see outside of themselves and feel for others. God has given me a couple amazing boys!  I’m one lucky momma!